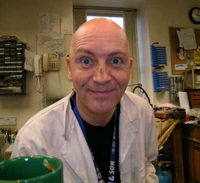 Gerard Collins
Gerard was born the son of Dr Louis Collins and was expected to follow in his father’s medical footsteps. After completing his A levels, Gerard applied to Guy’s Dental Hospital, London and was invited to attend a group interview. On the day, Gerard was amongst a number of applicants asked to fashion a coat-hanger into a figure of eight as a test of manual dexterity.

Gerard noticed that four of the applicants presented pieces of handmade jewellery in place of the coat-hanger test. Gerard learnt that these men worked within the jewellery trade but hoped to pursue a profession in dentistry. As both professions required similar skills it was not unusual for this to happen. Gerard suddenly thought he may prefer a profession as a jeweller to that of a dentist and returned to tell his family the shocking news.

After training with Jonathan Silver & Co, Gerard opened Precious Metals in 1976 and quickly built a reputation as a talented goldsmith and jeweller. Now, nearly forty years later, many customers from those early days remain loyal to Gerard; some still wearing the original rings he made for them. 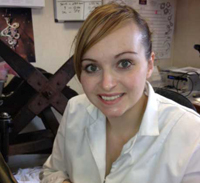 Sarah Collins
Gerard’s first Precious Metals workshop was next door to ‘Gala Shoes’ in Burnley and as a teenager there was always something that daughter, Sarah wanted from there. If she spotted a pair of shoes she fancied, Gerard was happy to let Sarah assist him until she earned enough money to buy them. Sarah made a hundred silver mace brooches when she was fourteen – all to fund a pair of Kickers.

At seventeen Sarah left college to begin her official training with dad. One of her first jobs was to hand-make the Lord Mayor of Newcastle-upon-Tyne’s Chain of Office and restore the Mace. At the time she found it quite daunting to be working on a piece once held by King Charles the II but now (twelve years later) after restoring the Preston chain and hand making screws, wings and scrolls, Sarah can proudly say that she has joined her father in becoming one of the leading conservation goldsmiths in the country.